NextReports Server 2.5 widgets have a new action called "Embedded Code". This action shows inside a panel an html code that can be inserted in any other web site page to view the corresponding widget. To accomplish that an iframe is used : 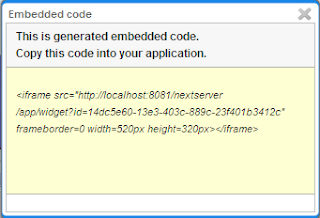 NextReports Server allows from version 2.5 to define cache settings for all entities that can be added to dashboards : charts, table reports, alarm reports.

Reports are represented with different icons to know which ones can be cached. In next picture, besides simple reports, we can spot alarms and tables.

User can set an expiration time in minutes, if cache is used: 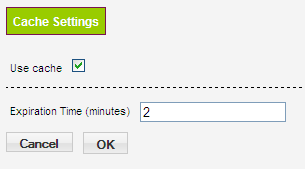 So only on the first load, a widget will do a database call. Any refresh inside dashboards done for all widgets created from a dashbordable entity, will take the result from cache until it will expire, then it will hit the database and again for next calls result will be taken from cache until cache will expire again.
Posted by Unknown at 06:39 No comments:

After setting a https server, on Internet Explorer all the flash widgets showed a #2032 Error. Firefox was working as expected. This was obviously an Internet Explorer bug and the solution to it was to add two response headers : "Pragma" and "Cache-Control".

Testing again, everything was ok, except refresh action. A refresh on IE wouldn't load the chart. The problem was IE cache. Also no drill down was possible because of this. The cache mechanism in Internet Explorer is different from that used by other browsers like Firefox. So we need to force IE to not cache flash. We add another response header "Expires" and set it to -1, and also we used "no-store" value  for "Cache-Control".

Final solution was to use in our WebResource the following :

For previous versions, user can select for a cell which borders to see (top, left, right, bottom). All borders had the same thickness (thin, medium, thick) and were black. 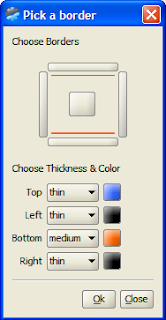 Exports in HTML, EXCEL, PDF and RTF can generate now colored borders.
Posted by Unknown at 08:53 No comments: