NextReports Server offers a web service api to be used by different client applications. To be able to use any web service, users have to login with their credentials, otherwise no calls can be made to the api.

NextReports Server uses Jersey for REST web service implementation and Spring Security for authentication and authorization. To make authentication possible,  Jersey integrates with Spring through a special servlet defined inside web.xml:
All web service calls are mapped to a special url pattern /api/*  so to apply security a filter-mapping is added in web.xml:
Web Service client has a method to authenticate the user:
By default, Jersey has a big timeout value after a requests returns if no connection to the server is possible. All client applications need a smaller timeout, so a new method was added for this:
where timeout is a value in milliseconds.

This natural way (vertically data scaling) translates to generate a sub-report for every result from our query.You can read more about it here.

There are some situations when users want to scale their data horizontally and not vertically as in a master-detail form. Your query can become from too complicated to nearly impossible in achieving such thing. To make it easily possible, NextReports 6.1 introduced a new type of element inside report layout: Multiple Report.

Multiple Report element (FOR) contains a report with a special property: "multiple report sql" (FOR-SQL). The report must have a parameter with the same name as the column from FOR-SQL.

At run time,  this FOR element is replaced with a number of report elements. This number is the number of values returned by the FOR-SQL. A value from FOR-SQL will be passed to corresponding report's parameter.

To make it more clear, lets look at a simple example. We have a simple database with scores from EURO 2012 tournament. These scores are grouped on stages like Group First Game, Group Second Game, Group Third Game and so on until the Final. Inside database there are also kept the scores entered by some users. Any user guessed the result exactly, guessed just the prognostic 1/X/2 or did not guess anything and was rewarded with 3 points, 1 point, 0 points respectively. We want a report to show all the results as they happened and all the results entered by users with the rewarded points. We also want for every user to compute the total number of rewarded points per stage and per entire   tournament along with some other statistics.

To make an idea of what we want to accomplish I will start with showing you the results. You can see in the first image every stage with the games, scores, users scores and users rewarded points: 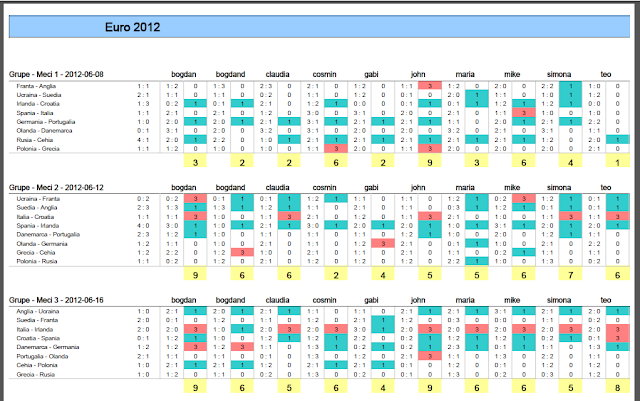 In the second image (the end of  report) you can see the statistics for the entire tournament:

This kind of report is a typical candidate for a "Multiple Report" usage. What we can observe by looking at the previous images is that report can be divided between to elements: 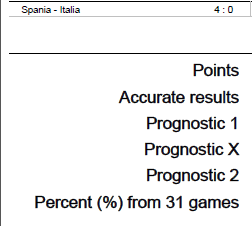 So we need to create two reports. First one has just a grouping by stage (to show games and scores) and the labels for statistics section: 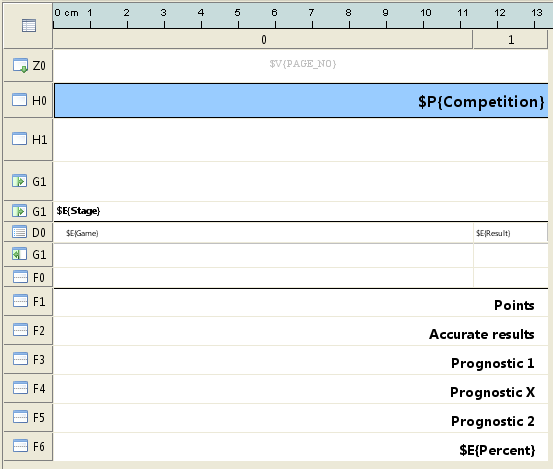 Second report also has a user parameter allowing us to run it for every user.

After that we can create a new report with the following layout (just two cells where we insert the previous reports):

We can see that the second report was added as a "Multiple Report" (FOR element). When we click the FOR element we can see it's properties with the new "multiple report sql". This query will return us the names of the users who entered scores for the tournament: 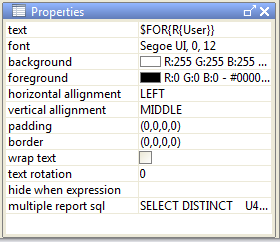 When you notice that you need a "Multiple Report" for your design, it is always easier (especially if you have a lot of rows) to create at first a single report which will show everything just for a single entity (user in our case).  Then you should cut it in two reports (left and right parts) and create the new report as showing before. In this way you are sure that all rows from the split parts have the same fonts and padding, so when you run the master report there will be no vertical shifts.
Posted by Unknown at 01:15 No comments:

In NextReports 6.1 a new Favorites Menu can be found. Favorites are for NextReports what are Bookmarks for a browser. Practically, when a favorite is clicked, NextReports automatically connects to entity (report or chart) data source and the entity is loaded inside designer.

Any report or chart has a new action called "Add to favorites": 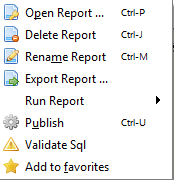 This action does just an addition to a list of entities which is stored in user home location. All favorites will be seen from Favorites Menu:

At the end of these links a "Remove favorites" action allows to manage favorites list.